We’re halfway through 2017, and it’s already been an interesting six months for big brands.

Consumers are keen to see values-driven marketing, and brands either tried to capitalise on this or failed to meet these standards. Some of the biggest brands made the biggest mistakes.

The good news for SMEs is that you can learn important practical lessons from these big budget activities and apply them to your own marketing strategies. And you don’t need a big budget to learn well.

Fyre Festival was supposed to be a destination-holiday-music-festival on an island in the Bahamas. It boasted luxury accommodation glamping, 5-star meals, concierge service and a fantastic line-up of artists. Supposed to be.

It was a trainwreck of disorganisation. Money was spent on promoting the event, heavy with influencer marketing ($250,000 was reportedly paid just to Kendall Jenner), but there was no investment in the actual logistics or services.

It was compared to scenes from “Lord of the Flies” with punters being stranded on an island with little food and water.

Fyre Festival was so abysmally bad that although it failed in April, 2 months later, it’s still getting articles in USA Today and Bella Hadid apologised again for being involved as a paid influencer.

We’re in July and there are still more articles about Fyre Festival in the media, and the organiser was just arrested and charged with fraud.

WHAT CAN SMEs LEARN FROM THIS?

1. A GOOD marketer will care ABOUT the quality of your product or service

Marketing is linked to everything else in your business; supply, sales, logistics product quality, support and customer service. And your teams should work together and want to know what’s happening across your entire business. They will want to know about your product/ service, and how you’re going to deliver.

A good marketer will be just as concerned about the quality of product and service as you are.

2. marketing is worthless if your product is crap

Throwing tonnes of money to have the backing of iconic musicians, artists, models and using the most glamorous faces on social media is not going to save your product or service if it’s the equivalent of putting lipstick on a pig. And any marketer that tries to tell you otherwise is lying.

Kendall Jenner. Joins a protest. Against cops. She de-escalates the aggression by offering a can of Pepsi to riot police. Happiness ensues.

On its own, it isn’t a bad commercial.

But we don’t live in a vacuum.

A brand exists within the context of culture, and in this case, American culture.  A culture where images of protests against fatal police shootings were prevalent. And Pepsi’s creative and marketing team knew this.

What they seemed to ignore was the almost kitsch act of using a cause that was so serious (race and fatality) to sell soda.

And it was a huge stretch to associate Pepsi’s brand with social justice, race and police shooting issues.

After a huge backlash, and an initial attempt by Pepsi to defend the commercial, the ad was pulled on the 5th of April, mere days after its release.

Prior to the cancellation, “Pepsi drew 1.25 million mentions on Twitter, Facebook and Instagram, with 58.6% of the responses being negative, according to social media monitoring company Brandwatch.” Pepsi’s engagements on social media prior to the ad being cancelled were overwhelmingly negative. 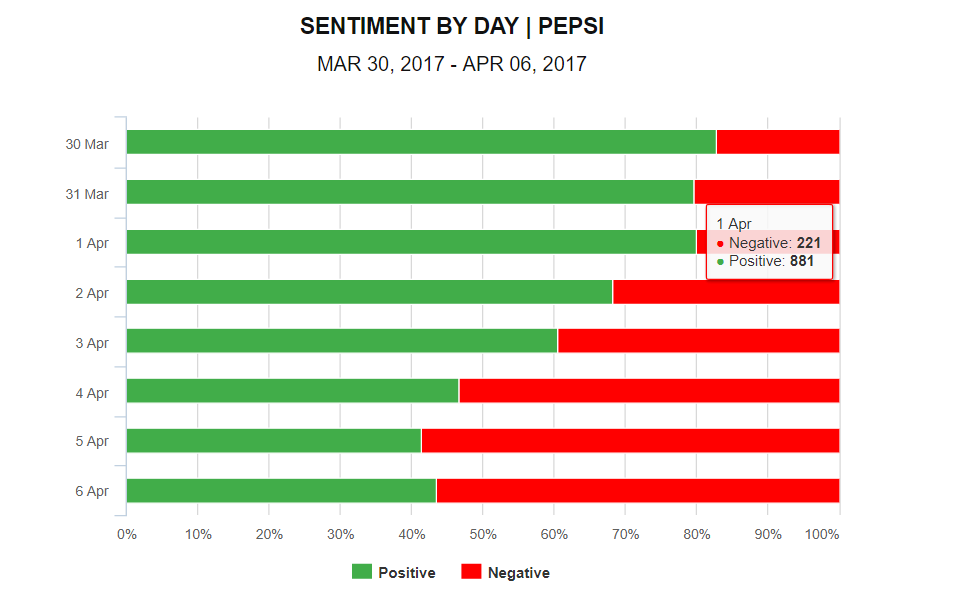 A later survey showed that some people now viewed the brand more favourably after they had seen the commercial.  Some opinion pieces felt the resulting controversy was its own level of genius, however, it’s important to note that this wasn’t measured in actual sales. Although it’s hard to quantify the sales impact, on social media, the response was overwhelmingly negative.

And most businesses aren’t Pepsi*. Most of us don’t have multi-million dollar budgets to spend on short-movie-commercials in a sole attempt to gain some positive brand awareness.

In the real world, we deal in measurements that don’t need an external agency to survey; sales, engagements, CTAs. So while some had a positive brand association after they viewed the ad, that’s still not a great return on investment.

*For an Australian example, see the PR campaign by Cooper’s Beer where they partnered with the Bible Society of Australia  – merging their brand with religion and a discussion on gay rights. (Yes. Really. This really happened.)

Again, it was hard to quantify the impact as Cooper’s is owned by a larger company, but according to Euromonitor, their core target of millennials in major cities did boycott Coopers after this campaign.

What can SMEs learn from this?

Don’t pretend to be something you’re Not

As much as businesses are being called to demonstrate values, it makes good business sense to steer clear of issues which have never been a part of your brand.

An ethical marketer will protect your brand – even from you.

Just because you love a cause or a belief doesn’t mean your audience does. A good marketer will tell you to ditch an idea if it harms your brand. After all, that’s what you pay them to do. 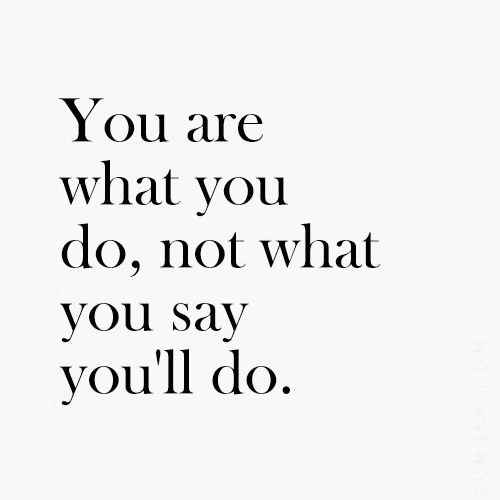 Consumers are not just product-aware, they are work-culture aware. And the values of a brand within the workplace are now more important than ever to loyalty and purchasing decisions. One of the key learnings from  February’s Edelman Trust Report (a survey of 33,000 people in over 28 countries) was that the public now places more trust in employees than in the CEO.  The voice of an employee matters more than the business owner.

No matter what a company guidebook says, accepted work culture is the reality. Sexism, harassment and bullying management were part of the accepted Uber culture. It just needed someone to call it out.

So when ex-employee Susan Fowler wrote about her years as an Engineer at Uber in her personal blog on Feb 19 2017, it was not easily dismissed by PR releases from head office, or appeased by placating emails from the CEO.

Her post was shared widely and more stories of sexual harassment and sexism emerged. Fowler’s post is credited for starting an internal investigation into Uber’s toxic work culture.

The impact was huge, and it hit the internal structure of the company: successive layoffs of senior management, waves of the #DeleteUber campaign and media scrutiny. After four months of chaos, with pressure mounting from key investors, Uber’s CEO, Travis Kalanick resigned.

The days when toxic management was easily forgiven are over.

In the past, Fowler may not have had the medium or the reach to expose her views so publically. And even if she did, it would be impossible to think that her article could result in bringing down the CEO and founder. Today, with the heightened awareness of consumers, every employee has the same leverage, and are more trusted than a CEO to comment on the company they work in.

WHAT CAN SMES LEARN FROM THIS?

employees matter – they’re youR biggest detractors or most powerful advocates

This one is pretty simple.

Don’t be a douche. Don’t hire douches. Don’t encourage a culture of douche-baggery.

Did I spell that right? Or, in nicer terms: Hire good people and be good to them. 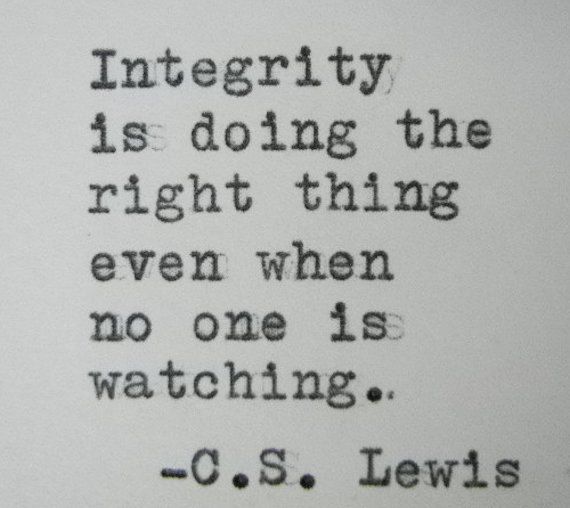 Today, everyone IS watching.

Consumers are now more educated and cynical than ever about businesses, and this knowledge has a huge impact on purchasing decisions. Armed with social media, consumers have the power to find info, share knowledge and amplify their advocacy or their disdain.

What used to be a consumer-brand dialogue is now shifting to where consumers have more power to dictate how a brand is perceived, and in some cases, how it is run.

Consumers value trust and the perceived lack of it is disrupting all institutions. And millennials the biggest group who are using their cash to protest and vote.

From all 3 cases, Fyre Festival, Pepsi and Uber, it’s clear that the power dynamic has shifted.

You can no longer depend on a big budget to steer public opinion. Public opinion will steer you.

So it’s more important than ever to get your brand’s ID and culture clearly set from the start.

how do you choose a good ethical marketer?

Marketing can either be your best friend or the worst friend you’ve ever had.

You know what I mean by the “worst” friend.

We’ve all had one.

That friend that says yes to everything you suggest, who never questions you, who encourages you to spend money on stupid ideas where they benefit, and then they disappear when your rent is late. Yes. That “friend”. You don’t want that one.

A strong ethical marketer won’t be afraid to tell you when something is a bad idea, or what risks you need to manage. They won’t just say “yes” if you want to partner with the wrong cause, no matter how much you love it. They will want to know more about your business – from service to support – before launching a campaign. They won’t be afraid to ask questions, say “no” and explain why.

The reason why a marketer with integrity is interested in your long-term reputation is that they see your reputation as theirs as well.

You don’t pay someone to say “yes”. You pay them to do a job, and an ethical marketer’s job is not to act as an enabler, but as a mentor to your brand.

A good marketer is the friend who wants to grow with you, who encourages self-reflection, who isn’t afraid to be honest, who offers opinions based on what’s best for you, not what she/he knows you’ll agree with.

It’s never been easier to get support and succeed if you’re a small, ethical business. Just make sure you hire a good ethical marketer to join you along the way.

So ultimately, it’s up to YOU – which friend will you choose?

Social Media: 5 reasons why bad reviews are good for you
What is “good” marketing?